With that criteria in hand, I dived into internet sources, blogs and books. The initial objective was to be able to make a short list of places in Costa Rica that fulfilled all the criteria. I started (as always) buying some guide books about Costa Rica and a much more detailed map: The Eco-travel guide by James Kaiser, the Lonely planet and the National Geographic map. 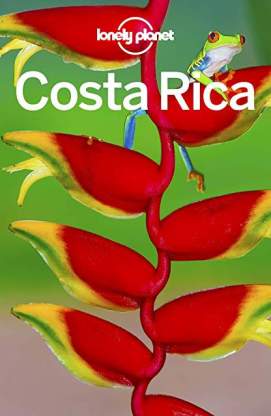 I liked the guidebook by James Kaiser because it particularly focuses on eco-travel. I bought the 2015 edition but I have noticed that he just published a 2019 version of the book which is probably much, much better since places that were pristine and off-the-beaten track in 2015 can be very crowded nowadays. I found the guide particularly helpful for us because it lists destinations according to the type of activity that one is after (scuba, surfing and hiking are there) and because it makes a clear distinction between the “old” highlights in Costa Rica (the original destinations that made CR famous) and the new highlights, combining “rustic natural beauty, light development and limited crowds” (all sounding heavenly appealing to us).  The new highlights included Nosara, Santa Teresa, Uvita and Drake Bay in the pacific; Tortugero and Puerto Viejo in the Caribbean and Rio Celeste in the northwest of Costa Rica. These destinations consisted in our first list (excluding Rio Celeste, since it is not by the coast).

The 2018 Lonely Planet Costa Rica guide suggests a combination of the old and new destinations, including Nosara, Montezuma, Santa Teresa and Mal país, Manuel Antonio and the Osa peninsula on the Pacific coast and Tortuguero and Cahuita/Puerto Viejo on the Caribbean. In contrast with Kaiser´s guide, the Lonely Planet offers more practical information about where to sleep and eat and local transport. All in all, although there is a certain degree of overlap, I find them quite complementary.

So, the next step was to find locations that fullfilled our criteria. Let me go one by one.

Since one of our main criteria was the proximity to a National Park and Marine protected area, the first thing was to check where were the listed locations with regards to the National parks (PN in the map) of Costa Rica.

Considering both the National Parks and the marine protected areas and excluding the traditional touristic destinations (Tamarindo or Manuel Antonio), Santa Rosa, Nosara, Uvita, the Osa Peninsula, Tortuguero and Cahuita/Puerto Viejo emerged as potential destinations. So, it was time to move to another criteria and element of the wish list.

There are not many good diving spots in Costa Rica- at least in comparison with the myriad of nature spots in land. One possible explanation is that although Costa Rica has been a pioneer in the protection of tropical forests, the protection of coastal and marine areas has been vastly neglected until very recently.

Nonetheless, Costa Rica hosts one of the most spectacular diving spots in the world – Cocos Island. Surely you have come across photos of schools of hundreds of hammerheads at one point in time. Yep, most likely taken in Cocos Island. It also happens that Cocos Island is in my bucket list and I have been dreaming about spending my 50th birthday surrounded by sharks in Cocos. Unfortunately, Cocos is 350 miles away from Costa Rica and it is extremely expensive to go there. So, it is still a “wait-and-see” if that item in my bucket list can be crossed.

The other four good diving spots in Costa Rica are around Playa Coco (Catalina and Bat Islands), Santa Teresa and Malpaís (Cabo Blanco and Tortuga islands), Osa Peninsula & Uvita (Caño Island) and Puerto Viejo / Cahuita (Cahuita reef), which ….taraaaaaaa (drumming sounds in crescendo) significantly overlap with some of the places in close proximity of national parks. The list is closing….

Living in Sweden, we spend most of the year daydreaming about tropical weather. We close the eyes and see flip-flops, sun, the sea and a hammock. After all, this was one of the  reasons to chose Costa Rica as the main destination for our sabbatical.

We have been in Costa Rica before and know very well that a tropical climate not only means flip-flops, sun and hammocks but it also means rain. Sometimes, lots of rain. While catching some rain is unavoidable, we wanted to plan the sabbatical in such a way that we could maximize the “dry” time.

With regards to climate, Costa Rica is clearly divided into two grand areas. Most of the Pacific coast (excluding the Osa peninsula) has tropical climate with wet and dry seasons, while the Caribbean coast and Osa, has rain all-year-round.

In the Pacific, the dry season runs from December to April. There might be some occasional showers, but it does not rain for long. From May to July is the shoulder season. The rain starts to pick up and one can start to feel the negative consequences of the rain season in terms of muddy roads, landslides and increasing rivers. The rainy season runs from August to October. Rainfall is the highest during this period, but more often than not, it does not rain for long. However, some roads might be impassable at that time, particularly when river crossings are necessary.

In the Caribbean and Osa Peninsula, it rains all-year-round. July to October are known to be really wet and stormy in the Osa peninsula. Considering that most driving in the Osa peninsula involves several river crossing, I can assume that it is a very challenging period to be there. In the Caribbean, it can rain at any time, but it usually does for some hours during the day.

Below a comparison of rain/temperature per month in Guanacaste (where Nosara and SantaC are) vs Puntarenas (Uvita and Osa peninsula) in 2017. It clearly shows that the Pacific coast gets truly wet from May onwards, but that there are clear differences between the north and the south pacific in terms of average days of rain, with the south being wetter than the north pacific (particularly Guanacaste). On the other hand, in the Caribbean, it rains all year round, but slightly less often than the Pacific during the rainy season.

In the Caribbean – Puerto Viejo-, the average temperature and rain days looks like this:

Crime measured as the number of homicides, is quite low in Costa Rica and usually related to settlement of scores between drug dealers. However, 2018 was witness to a couple of violent attacks to tourists which resulted in the rape and death of two women in the caribbean coast (Tortuguero and Limón). The attackers were rapidly caught but the reputation of Costa Rica as a safe country for foreign travellers was seriously damaged. As of today (March 2019) the Foreign ministry of Spain indicates that most violent crime is concentrated in the capital – San José-, however, there is medium risk in the touristic areas of  Tamarindo, Jacó, Tárcoles, Quepos, Manuel Antonio, La Pavona and Puerto Viejo where thievery has increased, sometimes with the use of violence.

Finally, our last criterion was frequent bus connections to San José. A quick look at the Lonely Planet guide showed that there are good connections by bus between all the places initially considered and San José – usually with a morning and an afternoon bus. Travel distances might vary significantly though: approximately 6 hours from Nosara, Santa Teresa or Puerto Viejo; 3,5 hours from Uvita; or 8 from Puerto Jimenez (Osa Peninsula).

Using the access to volunteer opportunities in conservation organizations in Costa Rica as a criterion to decide where to live proved to be not so helpful. The first internet search on “volunteer” and “conservation” and “Costa Rica”, led me to a set of international companies (US and UK based) who specialized in organizing volunteer stays in Costa Rica. They typically offer a several weeks “package” which includes the stay with a local family, while volunteering in a wildlife conservation project – often turtles. I actually contacted one of them which had very good reviews – but the results were quite disappointing. Not only were they extremely expensive but it was not possible to organize accommodation with pets. Furthermore, it is not possible to choose where to go since the arrangements that they have are set. All in all, it was not for us.

The conclusion was that rather than focusing on the possibilities to volunteer as a criteria to decide the specific place where to live, it worked better to have a short list of places where we could live based on the other criteria and THEN search for volunteer opportunities in those places, related to conservation. The search became more fruitful when I started to look for volunteer organizations in specific places and for specific activities – for example, “Nosara” “animal rescue” “volunteer” or “Nosara” “conservation” volunteer gave many more hits than just simply “Costa Rica” + “volunteer” + “conservation”. You can find a list of the volunteer organizations that we initially found here.

All considered, and after browsing some photos of the different places, we decided to shortlist four places:

Short list in hand, I could now dive deeper in what each of the locations could offer ;-). You will hear about it soon!

3 thoughts on “Where in Costa Rica?”