I guess that you have noticed, but Frank and I like birdwatching a lot. And Costa Rica is a PARADISE for birdwatchers. Really.

In the course of the first six months, we have been able to identify 220 birds. That might sound like a lot but it is not that impressive if you consider that Costa Rica has more than 850 species of birds, not counting those that are very rare or endemic of the Cocos Island. So, we have a lot of exciting months ahead.

So, tatataaaaaaa, here are our favorites (so far):

The Golden-hooded Tanager is also called the “seven colors” and it is indeed a very distinctive bird with a yellow hood, black mask, blue front, some lilac under the beak, and different tones of blue in the wings. It can be seen in the South Pacific, the North of the country, and in some parts of the Caribbean. It is usually seen in mixed flocks.

The Keel-billed Toucan is also spectacular. The beak is red, orange, yellow, green, and blue. It looks as if a child has been painting it with a brush. It has blue legs, a yellow breast, a black body, and some red feathers on the tail. It usually perches high up in a tree (or at least that is when we have been able to see it).

The most impressive is the Quetzal. It is indeed a beauty, and he knows it, as it poses for the photos of the hordes of tourists that try to catch a glimpse of him. It is however most spectacular in flight when the long feather tails undulate in the air.

Macaws mate for life and always are found in pairs.  This is one reason why it is so sad to find one of them alone in a cage, as a pet. Even when one sees a large group of them flying, it is possible to tell apart the pairs, who fly beside each other. They spend most of the time grooming each other and talking…A LOT. Maybe that is the secret of a long life relationship? 😉

The solitaires (Jilgueros) are the soul of the forest. Maybe they are not the best singers, but their song can be told apart from any other bird in the canopy.

I always have to think of the marvelous piano piece by Manuel Obregon entitled “Conversación con Los jilgueros” which you can listen to here.

We saw the duet moonwalk dance that these two manakins were performing around Drake. Unfortunately, we didn’t manage to capture it in the video. But you can see them in this National Geographic video. It is worth seeing it!

And if you liked the previous piano piece, do not miss this one, entitled “Danza con toledos”

This bird has been our 04:30 am alarm every day for 4 months. I still can remember how we looked at each other the first night in the Osa Peninsula when we woke up with the sound of the Grey-necked Woodrails around the house. Thinking…what on Earth is that?. They are early, they are loud and there are MANY.

A close contender is the red macaw

One of the largest birds of Costa Rica is the Great Curassao. It is found mainly on the ground in the Osa Peninsula, particularly around Corcovado. They nest up on the trees though. We saw this one on our visit to the ZooAve.

The smalles bird that we have seen is the Magenta Throated Woodstar. We saw this one at the Curi-Cancha reserve in Monteverde. Interestingly, it was feeding from a feeder that was far away from where the other (and larger) hummingbirds were feeding. It measures 7 to 9 cm.

The collared forest falcon is the first bird that we heard just before sunrise while we were at the Osa peninsula. We tried for months to locate it, but it was not possible. Even in the bird book, it says that it is more often heard than seen, as it usually hides well in the canopy. We had our lucky peep at him while we were at Hacienda Barú.

The most curious bird that we have found is the Long-billed Hermit (aka Gonzo). In the bird book, it says that it is a very inquisitive bird.

For months (before the rain season started) she would enter into our living room and hoover in front of us, before checking the house. It became such a familiar sight that we missed her when the rain arrived and she did not.

Ejem…let me introduce you the national bird of Costa Rica

Why? Why? I have asked myself many times. With all the incredible birds of Costa Rica, why choosing this particular one as the national bird? We have been told many different stories. One story goes that it was the favorite bird of the first lady. A popular one is that it is a bird found in all the different regions and ecosystems of Costa Rica and thus represented the country. But there are also other – and if you ask me- more beautiful birds that are also found all over the country.

However, we got the most convincing story a couple of weeks ago. It seems that the Clay-colored Thrush can sense when the rain is coming with some weeks in advance. And it announces it with a very particular song. When the peasants would hear this particular song of the Clay-colored Thrush, they would start planting the seeds as they knew that the rain was coming in approximately 6 weeks. So, it was a much-appreciated bird because it was extremely useful in rural Costa Rica.

Frank’ s first favorite bird was the Streaked Flycatcher. We had a resident one around our house in the Osa Peninsula which we observed regularly. Frank called it “El Zorro” for obvious reasons.

However, the Fiery Billed Aracari was love at first sight. He gets totally happy when we spot it, for the (very) brief moments in which he lets us see him. For months, we would only see parts of him in the canopy. One day the tail. Another the beak coming out of the canopy to get some fruits. Or veeeeery high up in the canopy, only showing us his profile- the very large beak for the small body.

But then, one day, we could finally see it in full. The colorful beak, the red belly ring, the black and red spot in the chest, the red triangle behind the eye, and the yellow eye. And the funny walks. Two on one side and two on the other.

I have a soft eye for hummingbirds. They are incredibly fast and agile, like acrobats of the air. So fast that most of the time one can only hear them rather than seeing them. Chiuuun Chiuuun, like two starfighters.  And then, when you least expect it, they are there, sitting on a small branch watching over “their” territory. This was the case with our resident Ruffous-tailed Hummingbird.

However, my absolute favorite is the long-billed hermit. I awaited its daily visit with anticipation. And marveled while it checked on us, sometimes, several times every day. It was also super interesting to see how it will learn his/her way around the house.

And, who can resist to the natural twin of Gonzo?  😉 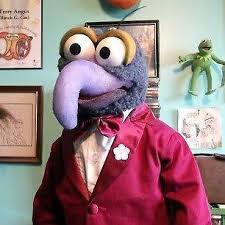