Our one year sabbatical in Costa Rica and beyond

Well, well, I guess that anyone that has had a dog or a cat has heard it once or twice:

…while they are thinking: “and couldnt care less about what happens with the owners”.

I would have certainly signed that statement some years ago, when I adopted Matilda. This frighthened and shy cat that would not leave her stronghold under the bed until she knew for sure that we were deeply slept. She would avoid human contact as much as she could. Contact with people? bahhhh, better not.

But as years have passed, she has grown closer and closer to me. And later on to Frank. She has become attached to people.

So much, that the house where we are doesnt matter as far as she is with the pack. Or so it feels.

In the time that we have been in Costa Rica we have changed houses nine times. And it never ceases to amaze us how easily Matilda is getting used to it. As if she had been doing it her entire life. No more hiding under the sofa or bed for days…but sleeping relaxed on the sofa or in the porch, while watching the forest. 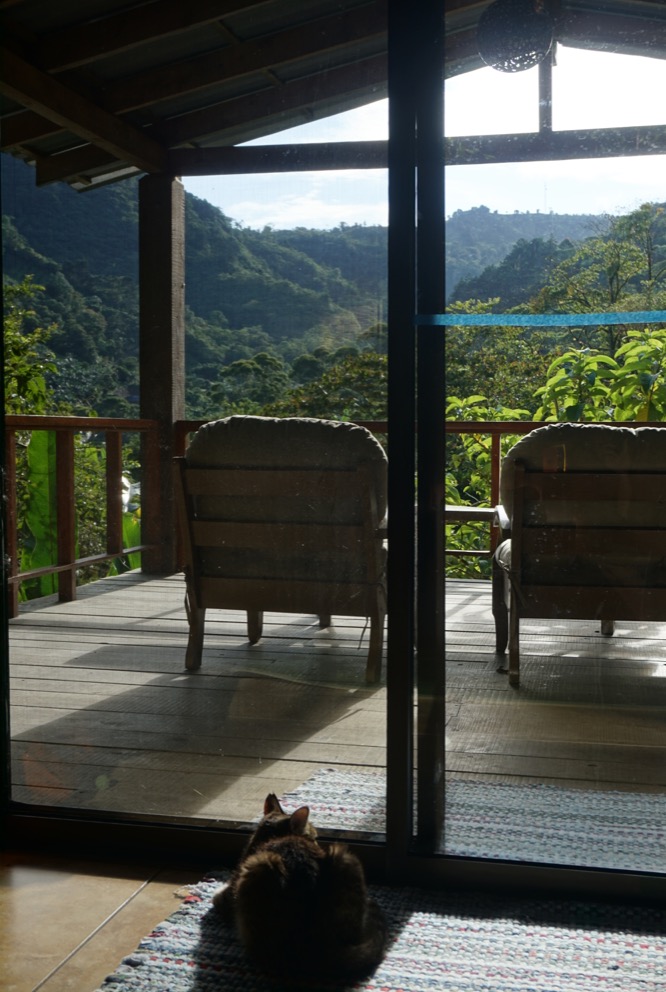 So,  what is the trick? I think it is a combination of the character of the cat and the way in which we signal to her that this is our new home. Let me explain.

Some time ago, when I adopted Matilda, I learned about the importance of a landing site. A landing site ideally is a room in the house where she can hide when arriving to a new house. Our landing site is usually the living room. It provides her with an overview of the entire house and, at the same time, there are usually several places where to hide if she wishes to. So, when we arrive to a new house, we place her transport basket in the living room and open it, so she can start exploring.

While she is cautiously exploring the house, I set up her cat sand and her bowls with water and a bit of food. The later usually attracts her and helps me showing her where her feeding “facilities” are in the new house. We also place her favourite basket somewhere close to where we will be sleeping.

She usually locates the cat sand and the sleepig basket on her own by the smell.

Once that the basics are in place, we communicate to her that this is our new house ….through smells.

We have a couple of beach sarongs and bed covers which we bring along whenever we travel with her. Initially we did it to prevent leaving cat hair on the sofas and beds of the places where we were staying, but over time we have realized that it serves an additional purpose. It carries her smell and thus communicates to her that it is our (new) home.

Once we have unpacked everything and it is finally quiet in the house, one of us will sit by the outside door and call her. She will go out and start exploring the garden under our supervision.First only sitting beside us taking up the smells. Then she would dare to step out the house. 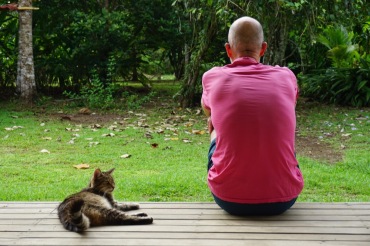 Her exploration of the garden takes place in three stagess.

Stage 1:  First, she will go out of the door frame but still within a meter or so of the entrance to the house. She will be constantly checking that the door is open and she can come back. We call this the “Stage 1” in the exploration phase. 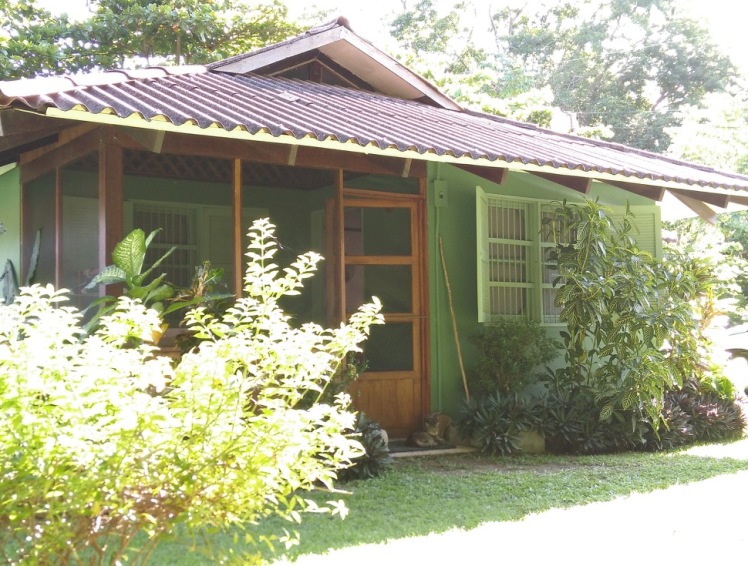 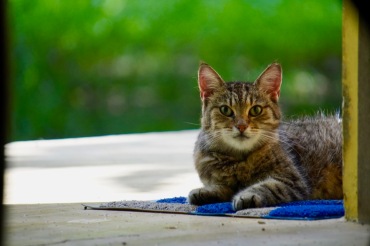 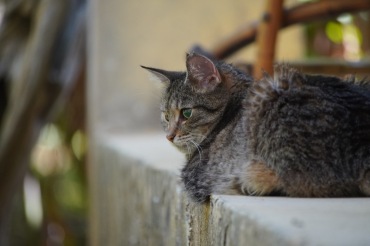 Stage 2: After it is clear to her that she can come back (that is, that we keep the door to the landing place or safe place open), she will start walking the perimeter of the house, taking up the smells and, we think, making mental notes on how to get to the entrance again. It is interesting to see that she will return home exactly following the same route where she went it.  We call this the “Stage 2” in the exploration phase.

Stage 3: When she is done with the exploration of the perimeter of the house, she will tipically come back to the entrance and lay down by the entrance, but outside. Only then she will venture to go to explore the garden more freely and even lay on the grass. We call that the “Stage 3” in the exploration phase. 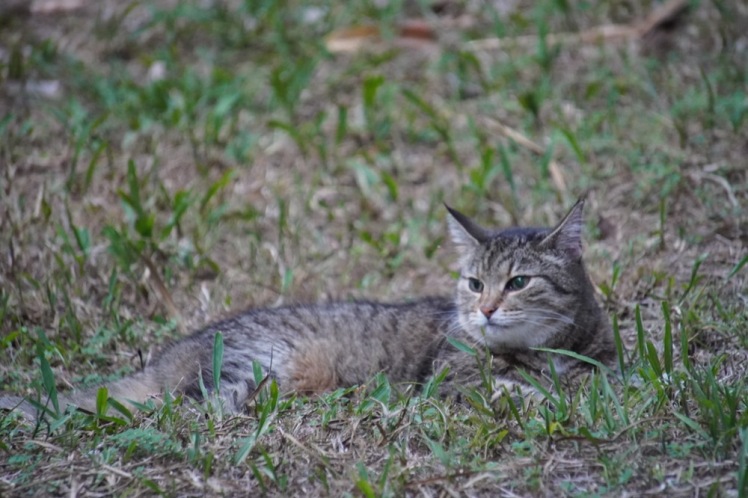 Stages in Matilda’s exploration (the blue box is the house) 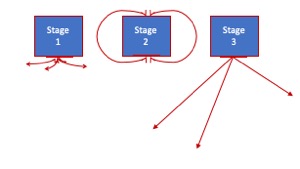 I guess that as an owner, you need to know your cat well before letting her go in a new environment. Matilda has a very good thing which is that she comes home immediately when you call her.

We have noticed that her response is much much faster here. Maybe she understands that this is an unknown environment and that when we call her is for her own safety. But that is probably too much of an explanation for Matilda. Maybe it is the fact that we have systematically rewarded her positive response with some food. Or maybe it is a combination of the two.

Whatever it is, it works. And we can let her go out and explore the house surroundings, with the certainty that she will come to us if something happens and if we call her.

Mati also has also another very good trait. She is a VERY very careful cat. In a country where there are many poisoness snakes and other dangers, I wouldn’t dare to let her out if I didn’t know she was so careful.

It is also super interesting to see her walking in a new environment. Pondering every single step. Watching carefully ahead and behind. Blending with the environment. So much, that if we didnt know where she was, we wouldnt have been able to find her in the garden.

Foto: Mati analysing the environment before going out

It is possible that Matilda would prefer to stay in just one place than to follow us in this tropical travelling Circus. But it is also true that as owners we can make this house transitions much easier for our furrballs by following certain routines. We can make each house her home by bringing her the smells, her favourite sleeping basket and following similar routines every time that we arrive to a new place.

As the song goes….wherever I leave my Cat, that’s my home 😉