Our one year sabbatical in Costa Rica and beyond

In addition to the two dogs, the howler monkeys and Manchita (the resident cat), the house we are staying in has a large collection of local fauna. I’m not talking about the birds that delight our daytime, but other creatures with more nocturnal habits

A couple of nights ago, Frank and I were lying in the hammock, enjoying a glass of wine after dinner, when suddenly I saw a scorpion climbing up one of the white fence posts. It was not of the small sort that I knew from Spain, no. It was akin to those that appear in National Geographic documentaries: black, with large tweezers and stinger and LARGE – about 15-20 centimeters large.

Frank, who already knows that when I see an unusual animal I tend to run out of words, just followed my trembling finger pointing out at the creature, with the luck that he caught a glimpse of the Scorpio before it disappeared on the other side of the pole and in the blackness of the night. Well, we thought, at least we know now what they look like around here, while we promised ourselves that we would routinely check the bed every night, and shoes before putting them on.

The next day and at about the same time and in the same circumstances (we had just had dinner and we were sitting on the porch chatting) I saw from the corner of my eye something black that was moving quickly towards the house. Damn, I thought, the scorpion returns. But turning my head to see what it was, I discovered with horror and fascination (in equal parts) that it was a real tarantula, with hairs and everything! This time, I managed to articulate the words “Frank” and “tarantula” although it had not been necessary because when he saw the blood drained from my skin, he started looking in the direction of my eyes. We enclose graphic proof so that nobody thinks both animals were the effects of the wine …

Frank making a photo of the Tarantula with his phone 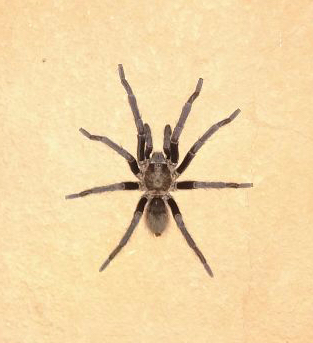 The day after the sighting of the tarantula (which we finally identified as Aphonopelma crinirufum) we were on our morning walk along the dirt roads that surround our little house when I saw that one of the millions of sticks on the road, rose when Frank passed over it, and opened its mouth. This time, I managed to shout “Frank” and babble “snake”, as I walked -veeeeery slooooowly- away from it.

That same day, talking with the gardener of our house about our recent meetings, he told us, nonchalantly that there are many snakes, scorpions, and spiders around the house. And that, in fact they have a special preference to enter the house when it is very hot or when it is very windy. He added that on windy days, snakes tend to get off the trees and hide among the leaves because apparently, they dislike the sway of the trees. So “be careful”, he added.

Today is a hot and very windy day. I write these lines, inside a closed house. Just in case.

Just a final note. With regard to wild animals, our advice is very simple: Be wise, be careful and be respectful. Wild animals do not generally attack humans unless they feel threatened by us. This includes seating on them, stepping on them, poking them and, not the least, trying to kill them. So, try to avoid engaging in any situation in which they might feel threaten and:

And the most important of all, always remember that it is not “them” entering “our” house but it is “us” that build houses in “their territory”. So be respectful. And do not kill them just because they happen to be there. It is THEIR home (too). So, try not to engage and try to give them space. In our experience, they are as scared of us – humans – as we might be of them, and will leave as soon as possible.

P.S. Needless to say, no animals have been harmed during the production of this blog.

4 thoughts on “Scorpions, tarantulas and other night creatures”